Here are all the pictures from our trip so far!!! Today we are headed to Grandpa Henry's house to pack up a few things and then off to Cousin Lindsey's to check out some clothes for our Maddie! Nick wants to stop at Best Buy and I think a fabric store stop would be nice. Here I come Hancock!!! 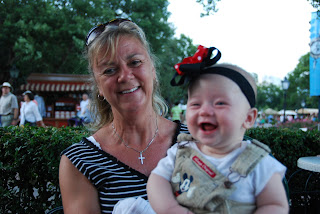 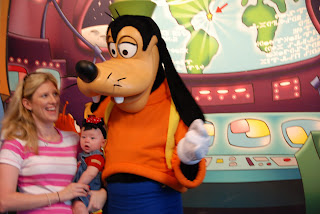 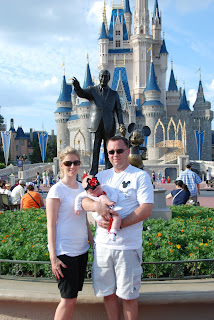 Well, we (Nick, Maddie, Linda -Nick's mom, and Me) just returned late last night from our fabulous Walt Disney World vacation. It was magical! There are so many cute pictures and fun stories to tell. I will try and pace myself. We had a great flight there and hurried off to the Magic Kingdom to watch the fireworks the very first night. They were so sparkly. Tinker Bell even zoomed down from the top of the castle before the show and kicked off the fireworks. It really was the best fireworks show I had seen. Of course Maddie slept through the entire thing (loud booms and everything)! The next day we spent at Hollywood studios and the Magic Kingdom in the afternoon. Nick and I were chosen to play the part in a little special effects show at Hollywood Studio. We were supposed to be the comic relief it was a stretch for me but Nick did great. Linda video taped the entire thing. We wore our matching shirts I made and had our picture taken with Mickey. Then the final two days we spent at Epcot with a half a day at the Animal Kingdom. I did forget my park ticket one day and had to travel back to the hotel by myself to get my ticket, I sure felt like a stupid head! But Epcot was so much fun and the food was yummy. I really enjoyed the German food and the yummy coffee and desserts in Paris! I was very surprised at all the things Maddie could do. She really could go on lots of rides and all the shows. We even went on a boat ride in Norway and it was sort of like a baby roller coaster. We really had to hold her tight. She loved every minute of it! Here is the sad part. It started to pour down rain yesterday as we were leaving the park and I was hurrying and boom down I went in a huge puddle with my purple backpack on. That was sad and embarrassing enough but then I remembered that all our cameras were in my backpack. So when Nick asked if I was alright I didn't answer him for a few minutes because I sort of hoped I had broken something so he wouldn't be so mad about the camera. I sort of landed on our brand new HD video recorder! UGH!!! And it broke. So I am spending tomorrow calling the warranty place and seeing if they will fix it even if it was sat on. But, here is the happy part..Nick wasn't even mad!! WOO HOO!! So we hurried out of the park, caught our bus and I took the flight to Ohio soaking wet! Did you know that Air Tran does not give you blankets anymore. They stopped on September 1st! Maddie was a dream and I thinks he only cried a few times the entire trip and slept all night every night! We are so blessed. Here are a few photos and I will put up a link soon to the rest.
Posted by Julie at 7:41 PM 1 comment: