A Almost One Year Old! 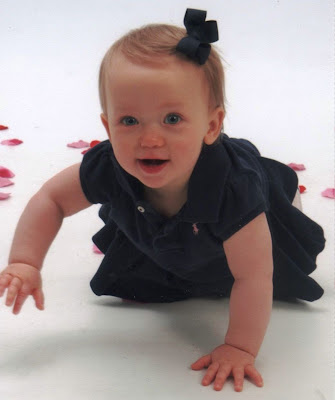 I can't believe that my baby is almost one! Here are few pictures we had taken when we were in New Mexico. She was so serious that day! I had scheduled the appointment for a few days earlier but 2 hours before her appointment she slipped while pulling up and skinned her nose. In the pictures you can still see a little bit of the scab which fell off about 45 minutes after we finished the pictures! I think she really looks like Nick in her serious picture. 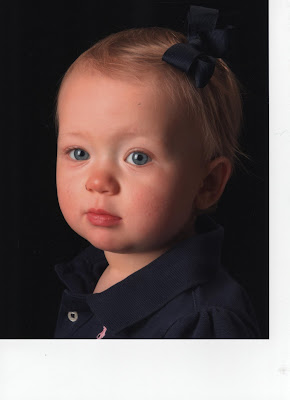 She sure is a joy! 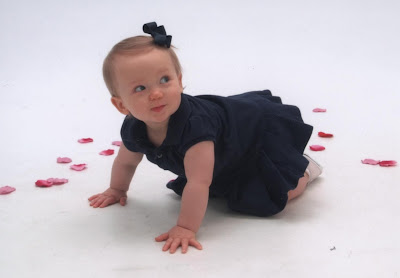 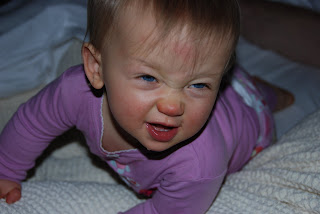 Isn't that a cute face! She loves to make this face and thinks she is so funny.

We sure had an adventure during our two week stay in Albuquerque. Madeline and I headed out Tuesday the 3rd of March to visit Nick. We caught a flight from Lawton and had a short layover in Dallas. Finally we arrived in New Mexico to a very happy to see us Dad! The trip started out great but quickly got rocky. Madeline did not sleep very well in her pack and play and spent many nights with us in bed. This means that Nick and I got lots of kicks, eye ball pokes, fingers in the ear and even one time I woke up to Madeline checking out the inside of my nose! Then on Monday afternoon I notice that Madeline was rather warm. I went to Walgreen's at 11:30pm to pick up a thermometer when she woke up burning up and screaming. She was running a 102 fever. This was the first fever above 100 she had ever had! So Nick and I freaked out like first time parents. We called the nurses line and after 40 minutes on hold they told me that 102 was no big deal and to give her more medicine. So by 1:30am we were all back asleep again. The next more she still had a fever but after calling our Altus doctor they told me not to worry. (I still worried) When Nick got home from work I noticed Madeline seemed even warmer and here temperature had reached 104.5! So we head to the University of New Mexico hospital. After spending 6 hours in the ER we learned that our Madeline had a UTI. They gave us a prescription and sent us home. They were amazed at how happy she was even being so sick. She waved at everyone in the waiting room and all the nurses and doctors. She would even clap now and again and if a cell phone rang playing a song she did a little dance. The next few days I pumped her full of liquids, Tylenol, and antibiotics. 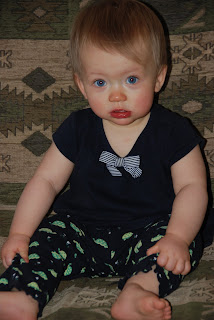 My sick baby!
Finally by Sunday she was her old self again and super duper happy. What an adventure. Nick and I enjoyed lots of yummy meals and some great Target shopping. Madeline's new things are...drinking from a straw, pulling up on everything, standing up and sitting down without just falling over, eating all forms of bread, trying lots of Mommy and Daddy food, and poking at her own belly button! She was so much fun on the way home. She either slept, chatted, or looked at her books the entire 7 hours. I sure hope traveling is always this easy. 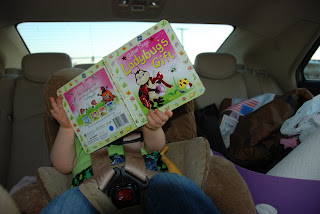 Madeline on the way home! 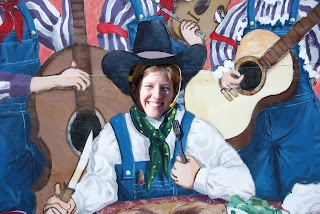 Me at the Big Texan in Amarillo! 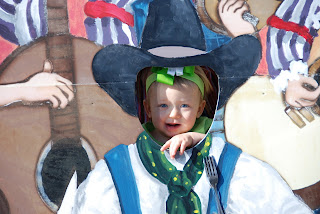 Madeline at the Big Texan!

We are all so glad to be home and now the preparations can begin for the big FIRST BIRTHDAY! 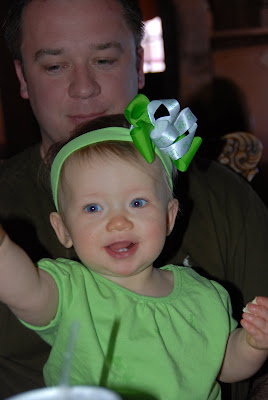 Happy St. Patrick's Day everyone! We are finally home from New Mexico and I have Internet that doesn't require me hanging out a window and tipping the computer towards the ground. I hope everyone remembered to wear green! Here is Madeline (my almost 1 year old) saying Happy St. Patrick's day from the Big Texan in Amarillo. Also, her shirt has shamrocks along the bottom and the bow say Luck of the Irish!
Posted by Julie at 10:41 PM 1 comment: